For years the Admin account has been used to administer Laserfiche using a limited built-in license so that you:

While this works fine for Laserfiche, it is causing some issues in Forms as there appears to be no way to log into Forms 10 with the admin account if it does not also have a "read/write" license associated with it.  As Forms carries the sames administrative issues & emergencies, why is this same admin license not applied to Forms? 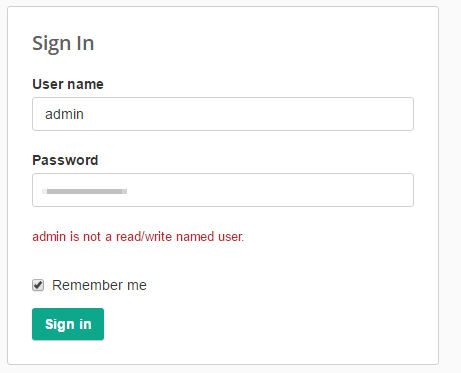 Any updates on this? Our clients are very frustrated that a named license needs to be allocated to an account that is used specifically for administrative purposes.

I'm having the exact same issue.

I completely agree.  Not being able to configure and administer Forms using the admin account is very cumbersome for us.  I think Laserfiche should re-consider allowing admin access to Forms.

The special status of the built-in ADMIN user is due to how the Laserfiche server interprets the login for security. However, Forms maintains its own "list of users" for assigning security, etc, because it has its own security considerations to worry about and really doesn't need to care about repository-level security, this latter becoming especially moot if Forms is configured to use LFDS authentication where there is no repository to base any existing security on.

In the Forms Configuration page in the User Authentication tab, you will specify one account meeting this licensing criterion to serve as the initial "System Administrator" which you use to set up system security, etc. For LFDS authentication, there is the additional criterion that the user must belong to a whitelisted LFDS group. For Laserfiche repository authentication, there is actually the additional requirement that this user have the Manage Trustees privilege. This can be thought of as the Forms analogue of the ADMIN user in a repository.

I understand your point but that still requires a license to access Forms.  The beauty of the ADMIN account is that a customer could use all of their licenses for end users and the ADMIN account could be used for emergency access.  As it stands now, if this were to happen they would have to take a license away from a user so that an emergency account could get into Forms.  It would be nice to see Forms have an "ADMIN" account not tied to any repository that could be used for the same purpose.  Emergencies happen and up until Forms, Laserfiche had been good at providing an emergency access account.

The named user requirement for the initial Forms Configuration/Laserfiche Server authentication setup is only one-time and used during initial setup. After that, the account is never used again.

You can review this help page where under the "Laserfiche Repository Users" section, it states

Using your logic then their is no point for the ADMIN account in the repositories as everything it does falls into the actions of being a "licensed administrator" and thus that account should not exist either.  I understand how it works but obviously from the other responses received, I am not alone in being used to administering the Laserfiche environment via a special account.  This has never been an issue until Forms and I am increasingly seeing it as customers have been designed & trained to handle their environment one way over the past 20+ years and Forms does not follow in the same logic.  It would be nice to see consistency where an "ADMIN" account with limited abilities so it is not used as a license (just like the admin account for the repositories) is available for emergency situations.  I understand that is not likely to happen but myself, as well as a few other people who have responded to this (and I'd wager even more who have not), would like to point out this issue we are facing.

I have the same issue relatively often too.

We have the same issue and would love to see it resolved without having to tell the client they need to buy us a "service" user license to admin or manage their processes.

I'll add my name to this list as well; having to ask the client to purchase an additional licence for the sole purpose of their SP administering Forms is not good. Especially considering we don't have to do the same thing for other areas like the repository.

Also - would be good not to have to temporarily assign the Forms service account a full user licence just for the quick task of creating/editing a connection profile.