The vendor that we use for our scanners no longer carries the 6000 series of Fujitsu scanners (FI-6130 etc) instead the now offer the 7000 series.

I installed Scan Connect and the scanner drivers, both ISIS and TWAIN. When selecting ScanConnect from the engine, I do no get an option for the FI-7160. I have been able to configure the scanner using TWAIN and it works flawlessly.

Any ideas about when the 7160 will be supported by Scan Connect?

After speaking with our scanner certification team, this is an issue that we and Fujitsu are aware of. Fujitsu will be addressing the matter with their driver.

We have tested this scanner with this new driver on a Windows 7 SP1 x64 workstation with Laserfiche Client/Scanning 9.2.0 and ScanConnect 8.3.0. We also logged into Windows as a local user that is only a member of the built-in Users group with no additional rights configured.

Basic scanning tests passed. The scanner was used to scan a variety of pages while changing various options such as paper source, resolution, color, etc. The pages were able to be scanned and stored successfully. Laserfiche Scanning and ScanConnect never once hung or crashed during our testing.

It is our recommendation to make sure to completely uninstall the previous driver and then download and install the newest driver from Fujitsu.

Well add us to the list of unsatisfied Scanconnect and FI7160 users. have to use twain or else we experience the same problems already posted on this string. Not sure when it will be fixed but hope soon because as users replace scanners they are popping up like crazy. Had two cases this week from two different customer sites.

This scanner is the worst. It works. But its a pain. They have updated the driver again for that link that Alex Huang posted and I got it working with scanconnect eventually. Better just avoid it though if you can

I am still unable to get the scanner to be recognized by Scan Connect. I do see a lot of older models in the selection dialog (as in the fi-5120, fi-6130 ect)

I tried the testappn.exe. The scanner was not listed in the list. I have attached a screenshot of what I see. What is interesting to me, is that when this dialog comes up in the LF Scan interface, there are a LOT more options for scanners. When trying to select a scanner for the testappn.exe, I do not see the same list as when choosing a scanner for Scan Connect in LF Scan.

I did try the KB article you mentioned. When I copied those files into the PIXTRAN folder, it prompted me to overwrite. They already existed in that folder. When I tried to configure Scan Connect, the scanner is still not showing up in the list.

As I said before, when we configure with TWAIN, we can scan without issue, though we would like to get it working with Scan Connect and ISIS. 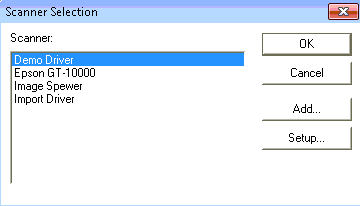 Uninstall ScanConnect, reboot, and reinstall. Note that ScanConnect 8.3 will actually install many drivers for various scanner models. However, if you don't see your scanner's driver and/or the list still only shows those same four scanners only, then follow the steps in KB 1011942 again. If that doesn't address your issue, then please open a case with support.

This may or may not be helpful, but these scanners come up in the Scanner Selection box in Laserfiche Scanning under "Paperstream_IP fi-7160" rather than just under "Fujitsu" in the list.  Took a little while to figure that out the first time I installed one.

I'm not sure if it's the same for TWAIN, but that's where I found it when setting it up with ScanConnect.

We haven't been able to get ISIS to work, even with the updated drivers. We got it to work somewhat with TWAIN, but PaperStream insists on popping up it's own UI to start the scanning process.

replied on April 29, 2014
Thanks Tim! I will see about downloading the new ISIS drivers and seeing if it appears under Paper stream instead of fujitsu. Appreciate the insight!
0 0
Post Link

FYI I have fixed a few printers by selecting the Paper stream "" option when using TWAIN and have not seen that pop up. Must be scanner dependent.

Anyone have an update on this? Does the Fujitsu 7160 now work in Laserfiche using Scan Connect with the ISIS drivers? Thanks

Nevermind. I'll answer my own question. As noted by others previously, we downloaded the updated ISIS Paperstream driver (9.26.10.0), and it works properly with Scan Connect 8.3, in Laserfiche RIO 8.3.2. When chosing the scanner you will find it under Paperstream IP (ISIS) FI-7160. You'll find that you adjust the 7160 settings inside of Paperstream (like that of Kofax), but it must use the Scan Connect license. We have noticed that when you open the scan window it's REEEAAALY slow (slower than kofax), unless you use TWAIN. Everything tested well (blank page removal, color detection, auto skew, etc.) Images look good. Just wish it loaded faster.

Thanks for these posts - we just got our first one of these.

The ISIS drivers worked on our first try with LF7.2 and Scanconnect, so that's good.

Fujitsu was pitching this as a an advantage - that somehow it would cost less because they didn't have to pay Kofax, and that they would be able to make updates to the Paperstream software where they couldn't change VRS.

Well, the scanner doesn't seem any cheaper, and now we have to buy a license of Scanconnect for each scanner (where Kofax VRS connection was included...)  Grumble grumble...

Any chance of Laserfiche and Fujitsu getting together to create a Paperstream-native connector like the Kofax VRS was?

Michael Wells said, "Any chance of Laserfiche and Fujitsu getting together to create a Paperstream-native connector like the Kofax VRS was?"

With this setup, do you have any Paperstream UI popping up? We weren't using ScanConnect, but we had the problem where after you clicked scan in Laserfiche, a PaperStream dialog would pop up and ask you to click scan again.

I've seen that dialog and haven't addressed it yet.

Kofax had the same behavior by default - it is supposed to be a feature where the scan operator could just continue to feed paper in the scanner without touching anything on the PC and the job would continue until the user hit "cancel."  I'm assuming this has similar functionality.

We're having some internal discussions here about how we will proceed.  Fujitsu dropping Kofax is going to cost us almost $200 per station.  :/

I'm wondering if anyone has an update for the new line of Fujitsu scanners, fi-7160, etc.

We have been selling Fujitsu scanners for over 12 years, but wondering if we need to change to another vendor.

Does anyone know if LF and Scanconnect are getting any closer  to supporting  this scanner??

What are you VARS using??

Update 11/26/2014: We installed one of these 7160's for one of our users (using a scan connect license\isis drivers) and cannot get it to work for them (scanning locks up), however If we login as admins on their box it works fine. If they have to be an admin on their box, that would not be good.. Anyone have any luck with these 7160's using paperstream and LF, so frustrating...