Has anyone created a Holds report?

I have a workflow that sends me an email report, however, it is very basic and I would like something more professional looking.  Before I spend time trying to get Workflow to update a word doc with lines of token information, has anyone else created something better?  Something that they would be willing to share to help people get started on their own?  Would be greatly appreciated!

Hi Connie, knowing a bit more about the use case might help us provide better answers.

By "Holds report" do you mean information on which entries currently have records management Holds and their dates and reasons?

I find that it is easy to put holds on records or folders, however, remembering to go back and monitor those situations is something that is easy to fall down on so generating a report to be pushed out on a Schedule would be great, and if it could include the due dates and the reasons then even better!

Our office has not adopted any formal policy on how to handle holds, so I'm working from scratch.  The plan is to be able to bring attention to holds at least once a year for a review by the parties involved in the hold.  I could break down an email to one person in each department with the results of my workflow, but workflow emails are very basic and I would like to present something to our staff that looks better.

Instead of forwarding my email notification to departments, I am tempted to tidy it up for them, which can be a lot of work.  Instead, I'm thinking I could use workflow to pop the pieces of information into a table on a Word document, but I have trouble getting that tool to work.  If workflow could, every time it finds a folder, pop the ID # into the first column in a table, the name of the folder into the next column and the path to the document in the next column, then at least I could just cut and paste sections of the table to email to each department.  I could probably even get it sort out each department to send separate emails to since I have the departments in a field on each folder.

But I hesitate to spend time on this project if there is an easier way.  For instance, there is the new Generate Report option in the web access version, but I can't see how I can get a report on Holds through that option, but maybe someone knows how?  And wouldn't it be awesome if I could access an option for Hold reports here...  ?! 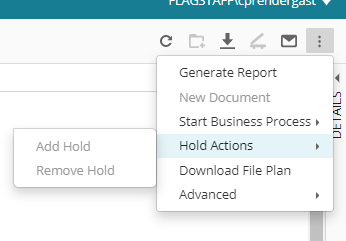