I have a Form where users can add multiple Docs from Web Access, this then moves onto an approval stage which is in forms, what i currently have is one document embedded in an iFrame where i pass the URL of the document from a Text Box on a hidden field in the form. This will display one Document successfully in a HTML iFrame with the variable of the hidden text box being called(URL).

What i would like to do is have all of the documents that the user has selected displayed in a list of iFrames so that it is dynamic, i can use Workflow and tokens to build the HTML for multiple iFrames code, and pass them to a multi line text box, however when i call the variable in the HTML box it will just display the HTML code and not the actual HTML it should produce as shown in HTMLFrame.jpg below.

Has anyone been successful in implementing this? 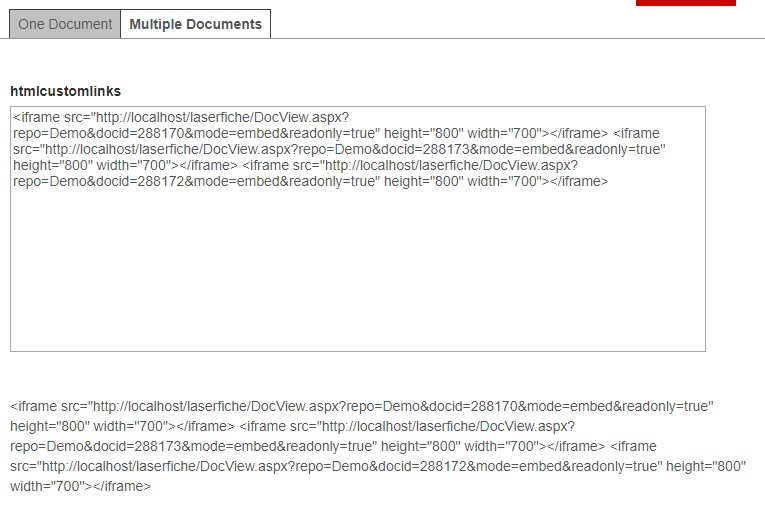 You're not using a textarea right? It should be a CustomHTML element, not a field.

How do you have your Custom HTML configured? Are you sure you pasted the HTML into the "Html" section and not the "Visual" section? (It looks like it is viewing it as plain text)

This is definitely possible and I have a few processes that opens documents in tabs within a form in a similar way.

I too can display one or two iframes with links hard coded or Dynamic as the src of the link from a hidden text box, however, when using WF to build all of the HTML as it is dynamic in length i am running into this problem.

I'm creating the links using WF to pass the HTML to a multi line text box(this could be 1 iframe or several in a long list using ul), as you cant pass from WF to a Custom HTML field in Forms, the WF produces the Iframes and the Laserfiche Link as the src, as there can be various lengths of iframes, this will then pass over to a hidden multiline text field.

I can pass the HTML with WF to a Multi Line Text box as shown in the images, however, when i then call the variable of the text box in the Custom HTML (HTML not Visual), it will only display the text of the HTML, and not the HTML Elements that the text should populate.

If i take the HTML that WF has produced and manually add it to a blank html page, it will populate the #of iframes with webaccess embedded, so it is not a problem with the HTML it is producing, it is how Laserfiche handles the html from a text box variable which is passed to HTML.

I have opened a support case as i initially thought that it was a bug in forms, to be told that this is in fact intended behaviour! You cannot place a variable in Custom HTML with HTML from a text box/multi line variable that has HTML inside(even with the correct tags).

That's only partially true. You can use variables, but they have to have been populated in a previous submission, and the variable cannot contain HTML because the field will treat it as a literal string value.

What I usually do is store the Entry ID values to fields (table or collection), then use JavaScript to extract those values to build the URLs.

So the only way to do do this would be to build a table with the entry ID's using WF which is hidden, and then use Java Script in a for each loop to populate the HTML required to display the iFrames, as currently out of the box forms cannot be passed HTML links from WF.