I have a user who has DCC set up so that multiple machines can perform OCR jobs. One machine in particular was experiencing an issue where there were multiple LFOmniOCR Engine (32 bit) processes running and it was causing the servers CPU to become overclocked. I was able to determine that changing the settings in WebAdmin for DCC so that the machine was no longer performing tasks, did not help with the multiple LFOmniOCR Engine (32 bit) processes running. I did go ahead and end the process in task manager and the machines CPU levels returned to normal. Does anyone know why there would be multiple processes occuring simultaneously that would cause this issue? I have provided a screenshot of what I was seeing. 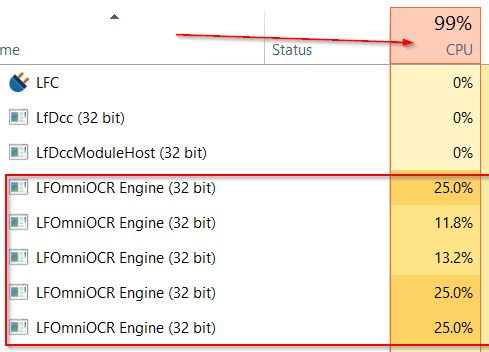 I also have an additional question regarding why even the DCC is set to only assign one task, why multiple LFOmniOCR.exe processes populate in Task Manager. We were able to determine that when we assign a DCC worker to perform two tasks concurrently, two LFOmniOCR.exe processes appear and then when one finishes it drops off leaving the remaining process. What it looks like is happening though is that even though we have only 1 concurrent task set, multiple processes pop up but they eventually drop off. It's almost as iff the DCC scheduler is not keeping track of how many tasks are being assigned.

Did Laserfiche have any insight on this?

Hi Charles, I'm running into the exact same issue. Looks like I'll have to open a LF support ticket. My customer only has 1 concurrent tasks set and there were 5 instances of the LFOmniOCR engine running.